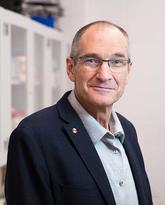 Herzog's research is focused on the neuro-biomechanics of the musculoskeletal system with emphasis on mechanisms of muscle contraction focusing on the role of the structural protein titin, and the biomechanics of joints focusing on mechanisms of onset and progression of osteoarthritis. Expertise is in the area of growth, healing, and adaptation of soft (ligament, tendon, muscle, and articular cartilage) and hard (bone) tissues. Within this area he works experimentally and theoretically on the molecular/cellular, in vitro, in situ, and in vivo level. It also includes cell manipulation and mechanical testing and finite element modeling, continuum mechanics, simulations and theories of growth and adaptation.

Neuromech TV Interview: It is not about papers, it is about people.  (Interview begins at one minute)

2020           1st Prize and Award for “Excellence in Basic, Clinical, and Translational Science”
form the Orthopaedic Research Society for manuscript “Multiparametric MR imaging
reveals early cartilage degeneration at 2 and 8 weeks after ACL transection in a rabbit model”

2017             Muybridge Career Award from the International Society of Biomechanics

2015             Hero of Biomechanics, awarded by student body of International Society of Biomechanics
for supervisory excellence and support of students and scientists from economically
developing countries

2011/2016    Canada Research Chair in Cellular and Molecular Biomechanics, Tier I

2009‑2011    Past President‑International Society of Biomechanics

2006             Canadian Society for Biomechanics, Career Award Presentation title: Muscle Mechanics:
From Society to Cell and Back

2003           Winner of the Inaugural Award for Excellence in Graduate Student Supervision,
University of Calgary

2002           Winner of the President's Circle Award for Excellence and Creativity in
Scientific Research, University of Calgary

1999           The Killam Resident Fellowship (for excellence in scientific research)

1996           “JCCA Award of Excellence” for manuscript which made the most significant contribution
between 1993‑1995 (Category: Literature Reviews)

1997‑1999   Past President, Canadian Society for Biomechanics

1994            Winner of the Canadian Association for Sports Medicine Research Award (with M. Maitland)